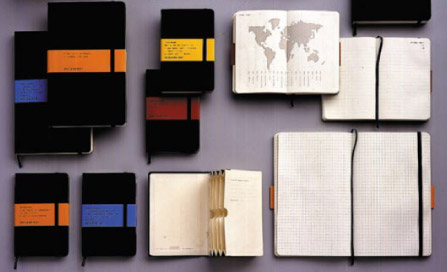 Moleskine®, publisher of the legendary little black notebook, is pleased to announce that it will be distributed by Chronicle Books as part of its newly formed partnership with the US-based company effective January 1, 2008.

Fabio Rosciglione, Vice-President of Sales and Marketing of Moleskine®, says “The story of the Moleskine notebooks continues to unfold in the U.S. market. The immense fan base that we see evidenced in the wide-spread blog community is testament to the appeal of these beautiful objects. The ‘little black notebook’™ clearly goes hand-in-hand with emerging technology. I wish to say that the good distribution work done by Kikkerland in supporting the brand will continue until December 31, 2007. Starting from 1st January 2008 on to the next years a new exciting chapter opens for our company and we are glad to form this new partnership with Chronicle Books.”

Jack Jensen, President of Chronicle Books says, “We are extremely pleased to undertake a U.S. partnership with Moleskine. Over the recent past this exceptionally talented publishing group has become the market leader in journals and planners, and the new interactive City Guides have already established a considerable following. Beginning January 2008 we plan to nurture and expand the loyal following for this highly revered brand.”

In addition to its current collection of notebooks, journals, planners, and guidebooks, Moleskine® will launch a new line of soft cover notebooks in February, and will expand its City Notebook series in March, launching new titles for Los Angeles, Chicago, Seattle, Montreal, Florence and Venice.

Chronicle Books Director of Distribution Client Services, Anna Erickson, “We will begin shipping on January 1st from our new fulfillment partner, Hachette Book Group,” she says. “We are excited to begin this new chapter with Moleskine. We could not be more impressed by the Moleskine staff. They truly are committed to the highest standards of quality. When you pick up a Moleskine notebook, you may not be aware of the care that went into its creation, but you will know that the paper is butter soft and the design is fantastic, and you will be inspired to pick up a pen and use it immediately.”

Moleskine® is the legendary notebook used for the past two centuries by great artists and thinkers, including Vincent Van Gogh, Pablo Picasso, Ernest Hemingway, and Bruce Chatwin. Their trusty, pocket-sized travel companions held sketches, notes, stories, and ideas before they became famous images or beloved books. The little black notebook with rounded corners, an elastic closure, and an expandable inner pocket was originally a nameless object. It was produced by a small French bookbinder that supplied Parisian stationery shops frequented by the international literary and artistic avant-garde for more than a century until they ceased production in the mid 1980s.

In 1998, a small Milanese publisher, Modo e Modo, brought the legendary notebook back to life under the name Moleskine, restoring a dense tradition, renewing the notebook format, and identifying the fact that mobile technologies work best when accompanied by essential analog tools.

Today Moleskine® is synonymous with culture, travel, memory, imagination, and personal identity. It is a name that identifies a family of notebooks, journals, planners, and guidebooks; each serves different functions, both essential and emotional. All are connected to the digital world through a network of websites, blogs, online groups, and virtual archives. The adventures of Moleskine® continue and its still-blank pages will tell the rest.

One of the most admired and respected publishing companies in the U.S., Chronicle Books was founded in 1967 and over the years has developed a reputation for award-winning, innovative books. Recently recognized as one of the 50 best small companies to work for in the U.S. (and the only independent publisher to receive this award), the company continues to challenge conventional publishing wisdom, setting trends in both subject and format, maintaining a list that includes illustrated titles in design, art, architecture, photography, food, lifestyle and pop culture, as well as much-admired books for children and ancillary products through its gift division. Chronicle Books’ objective is to create and distribute exceptional publishing that’s instantly recognizable for its spirit, creativity, and value. For more information about Chronicle Books, visit www.chroniclebooks.com.